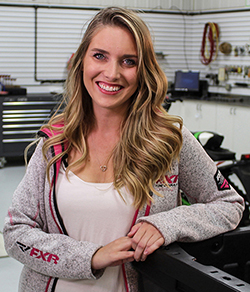 Chelsie Skorich is a play-by-play announcer on the International Series of Champions Snocross tour and most recently, the host of SledHead 24/7. Chelsie has worked in almost every aspect of the racing circuit. From flagging to scoring to staging to announcing, Chelsie has grown up in the world of snowmobile racing.

Some of Chelsie’s earliest memories are taking naps on her dad’s snowmobile while covering trails all over northern Minnesota and out west. Her family likes to say that Chelsie was riding snowmobiles and four-wheelers before she could walk. Her dad, Rod Skorich (the most current recipient of the CJ Ramstad Memorial Award), ignited Chelsie’s interest in snowmobile racing. Rod worked building tracks and flagging since Chelsie was a baby. As soon as she was old enough to help in scoring, Rod brought her with to the races and the rest is history.

You would be surprised to know that Chelsie’s background is not in broadcasting. Chelsie’s start in announcing came by having a microphone handed to her at a regional event while the regular announcer had to take a bathroom break. The next year, Chelsie signed on to announce the Minnesota Regional Circuit and then became the daytime announcer at the ISOC Nationals.

Chelsie’s love for powersports goes beyond the snowmobile industry. From NASCAR to TORC Racing to AMA Pro Motocross to the local dirt tracks, Chelsie can be found enjoying these events during the off-season.